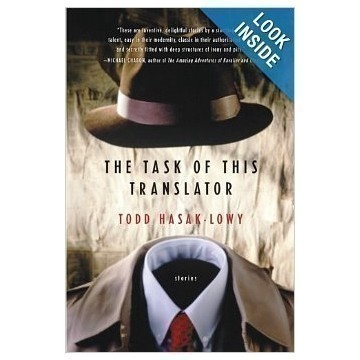 TASK OF THIS TRANSLATOR

TASK OF THIS TRANSLATOR

Stylistically daring, morally perplexing, and outrageously funny, Todd Hasak-Lowy's The Task of This Translator marks the debut of a writer of extraordinary talent. In these seven stories, Hasak-Lowy captures the absurdity that often arises when very personal crises intersect with global issues such as ethnic violence, obesity, and the media.

A journalist sets out to write an investigative piece on a dieting company that uses bodyguards to protect overeaters from themselves but loses his bearings when he becomes a client and is paired up with a bodyguard of his own. In the coffee shop of Israel's Holocaust memorial museum, a stale pastry triggers a brawl between an American tourist and the Israeli cashier. A man misplaces his wallet shortly before a nuclear exchange between India and Pakistan. An unwilling and mostly unqualified slacker finds himself cast into the role of translator for the bitter reunion of a family torn apart years earlier by unspecified brutality.

A standout story collection, The Task of This Translator is funny, intricate, and deeply human.