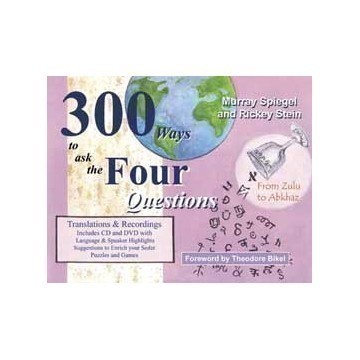 What the . . . ? Two nuts from New Jersey spent two decades collecting renditions of the Four Questions as a hobby. Then they met each other.

Who Needs this Book? No one - unless you've ever wondered about the feel of a seder in Poland or Portugal, or what an African click language sounds like, or how Shakespeare would have asked the Four Questions, or whether they could be asked in Klingon . . . .

A World Tour. Learn about languages you've never heard of spoken by hundreds of millions of people, and languages spoken by hundreds or less. Native American, African, ancient, invented - the sounds of all humankind, asking the same questions. Seder Puzzles and Games. Ways to use these translations to make a multicultural seder like none you've ever experienced. "Would one or two languages have permitted us to say Dayenu? Obviously not! The linguist in me takes great delight in this book, clearly the result of painstaking research. How is this night different? On all other nights, we may hunger for the word. On this night, we feast on it!" - Theodore Bikel

THE AUTHORS Dr. Murray Spiegel, with a background in speech research for telecommunications, has established a reputation for innovative Passover Seders. Since leading his first Seder while in graduate school, Murray has led over 30 Seders - no two alike. With his wife Randi, Murray has transformed their house into settings that enrich the Passover story: a Bedouin tent; a jumbo jet taking the Israelites out of Egypt; and an ancient Egyptian tomb. His car even carries the NJ license plate "Pesach."

Rickey Stein is a pharmacist with life-long interests in languages and Passover. He is particularly knowledgeable on the various writing systems used by the world's languages. 35 years ago he started translating the Four Questions and hasn't stopped yet. Both Rickey and Murray's Seders have been written up in The New York Times.