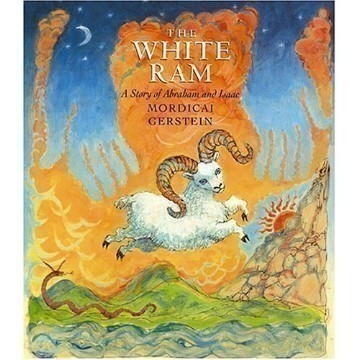 Grade 1-5–This stunningly illustrated picture book is based on a Midrash about a white ram that is made by God on the sixth day of creation for a single purpose–to sacrifice himself on the altar in exchange for Abrahams son. The art, done in pen and ink, oils, and colored pencil, is mesmerizing. With a captivating use of language along with true drama, Gerstein tells of the ram that patiently awaits the moment when he can play his part in Gods plan. I must save the boy! he repeats, and the story takes on a true sense of urgency. The selfless act contributes much to subsequent Jewish history, and thus to the entire world. Young children might be frightened by the evil one, who is depicted as taking many clever forms in order to foil the rams intention, but most kids will find the tale exciting. Both Judaic and Christological references can be gleaned from the text, but the story is truly ecumenical and would be universal to all belief systems. Dedicated to all our fellow animals from whom we take and receive so much, this book is sure to provoke thought and provide a moment of reflection about those in our lives who sacrifice so much for us. A masterful melding of illustration and story, The White Ram will enhance all collections