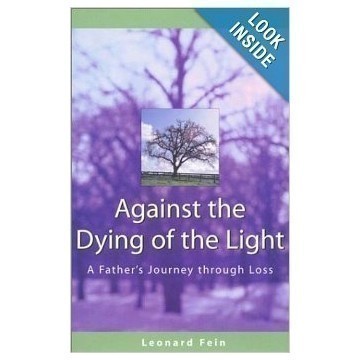 AGAINST THE DYING OF THE LIGHT

AGAINST THE DYING OF THE LIGHT

How do you explain a seemingly senseless tragedy? What does it mean to be an observer of your own life?
In this unusual exploration of heartbreak and healing, Leonard Fein chronicles the sudden death of his 30-year-old daughter and shares the hard-earned wisdom that emerges in the face of loss and grief.

With the rich support of his community, Fein anguished, questioned, and ultimately coped with the death of his daughter by wrestling with some of life’s toughest questions. The answers he discovers in the course of his own mourning process provide not only comfort to others in “the company of the bereaved” and strength to those who face personal tragedy, but also wisdom for all who search for life’s meanings.

Leonard Fein struggled with some of the deepest and most difficult questions of faith while mourning the death of his daughter Nomi, who suffered a heart attack at age 30. "I understood from the start that the act of writing was a way both to keep her alive and to accept the fact of her death. And I needed to do both," he explains in the first paragraph of Against the Dying of the Light. Fein, a veteran Jewish social activist, teacher (at M.I.T. and Harvard), and writer, recognized in his daughter's early childhood that she was "among the most interesting people I'd ever known." In case you missed the point of that statement, he reiterates: "'People,' not 'kids.'" Among the most striking things about this book is Fein's ability to see his daughter as a whole person--empathic, intelligent, and generous, and yet sometimes haughty and defensive. The first part of this book is a memoir, describing his relationship with Nomi. The second part is a meditation on the significance of life and death, and the experience of mourning. The conclusion synthesizes memoir and meditation in the form of a letter to Nomi's daughter Liat, who was an infant when her mother died. Fein also writes that his daughter's death taught him a new emotion: "The terror: I can no longer take my children's lives for granted." But the central lesson of this letter is that, although bad things do happen to good people, every person is obliged make a difference in the project of helping to heal a broken world. --Michael Joseph Gross