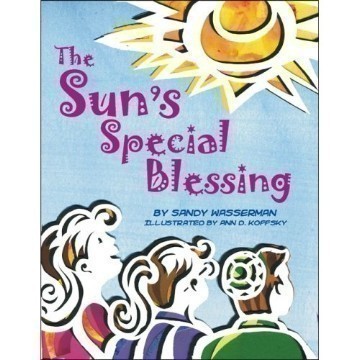 Because this year our sun returns to the exact spot it occupied at the time of Creation - something that happens only once every 28 years!

To celebrate this special occasion, the Jewish people across the world recite "The Sun's Special Blessing" which is known as "Birkat Hachamah" in Hebrew. Every twenty-eight years this Hebrew blessing for the sun is recited. The next date set is April 8, 2009 in the Hebrew year, 5769. The first night of Passover.

At this time, the sun returns to the position that it was, when the Universe was first created. Every 28 years, as the Jewish community celebrates the return of the sun to its original place in the heavens at the precise time and day of its creation, this prayer is universally accepted as part of Jewish law.

With shovels in hand, Mr. Jacobs marches his third grade class outside to find the exact spot where he helped bury the time capsule. When they open it, the class discovers the "ancient" artifacts that were so popular in the world 28 years earlier.

Now it's their turn to say the special blessing on the sun and put into the time capsule what they think represents their world of 2009.

What would you put into the time capsule?