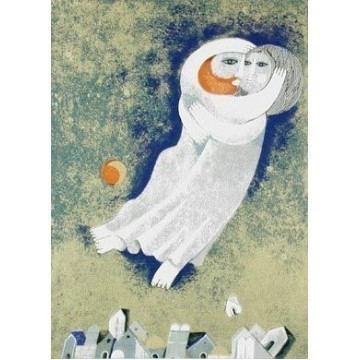 Samy Briss was born in 1930, in Jassy, Rumania where Ionesco was born 18 years earlier. He studied at the Academy of Fine Arts in Bucharest under Ressu, a disciple of Gustave Moreau.
In 1960 he settled in Israel and in 1967 he had his first one-man-show in Tel Aviv. His murals of mosaics and reliefs on wood decorate several public buildings. His works are in Museums and private collections in Rumania, France, Israel, England, Germany, Sweden, Holland, Luxembourg, Canada and the U.S.A. The artist lives and worksin Paris."Samy Briss is a painter of the magical and the marvelous, whose nostalgia for icons comes straight from his native Moldavian plains. His surrealistic artistic experience makes him brother to Paul Klee and Victor Brauner. But his images are symbolic, their naivete has a genuine popular essence expressed in a subtly metamorphosed conventionalized style. Briss's choice and use of colors are remarkable. As inventive as it is nuanced and captiving, it evokes the tones of the enamels, bisque-fired pottery, and the sober luminosity of the primitives. Briss's painting is one of myth and memory rooted in the web of time - in other words, in universal "childhood".