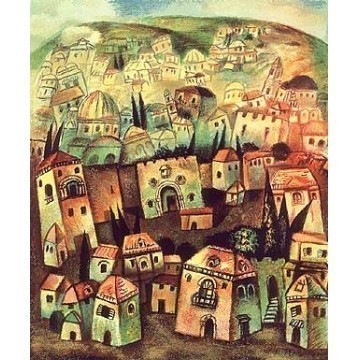 The son of a sculptor, Gregory Kohelet was initiated into art by his father. He wasn't pressured to learn "the classical laws of Art", but only to love and respect Nature - the master teacher. As a young boy, Gregory traveled with his father to wild landscapes with the intention of learning to understand the meaning of composition, color and expression as they exist in the Nature. There, he listened to the music of water, understood the wisdom of the stones. Nature taugh him to listen to silence. He thought that if he were to stay there he would become a Buddhist. But his was a different destiny. He left his parents and his town Fergana at tha age of 14 cand went to study art in Tashkent. He studied painting for 4 year at the Art College and then for five more years at the Academy of Art. He had excellent teachers, many from Moscow and St. Petersburg. At College he was particularly influenced by Eastern art : japanese, chinese, Indian, while at the Academy he studied European art : Giotto, Bruegel, Modigliani, Moore, Brancusi and russian icons. Yet he felt that his life's course must pass through Jerusalem. In 1990, he immigrated with his family to Israel ansd settled in Jerusalem. In the Holy City he absorbed much light and divine inspiration. He believes in God but only in Jerusalem did he really "meet" him. His influenced from literature : Bible essentially, Rilke, Matzu-Matzu (China), G. Lorca (Spain), P. Eluard (France). His influences from the world of Music : Mozart, Bach, organ and liturgical (Armenian, Catholic and Jewish). His family his also a source of inspiration : His son Daniel - born in Jerusalem - his first son David - born in Tashkent and his wife, who dominates the female figure in his work. The artist has long been living and working in Amsterdam.