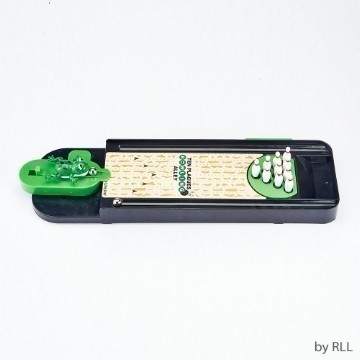 Are you ready to roll? Down the bowling alley that is! Introduce a whole new level of Passover fun and excitement with this Ten-Plague Bowling game. Aim the marble out from the frog, and knock down as many plague pins as you can to win! Please Note: Small Parts, not for young children.

10 Pins (plus 1 spare) 2 Balls Sticker Sheet GAME SET UP:
1. Add stickers to the bowling pins
2. Press down lever on side and load pins
3. Release lever and pins will be set
4. Place one ball on the side and one ball in front of the frog. May be played by up to four players.
OBJECT OF GAME: Score the most points in ten turns. Points are scored by knocking down Plague Pins.
HOW TO PLAY: Each player’s turn has two frames. To begin turn, set up the pins and balls as shown. Slide frog to aim at pins. Pull the trigger to shoot the ball while trying to knock down as many pins as possible. If all the pins are knocked down with the first ball, it is a strike. If all the pins are knocked down with 2 balls it is called a spare. When turn is over, next player sets up the pins and begins his turn. After 10 turns, whoever has the most points wins.
SCORING: For each pin knocked down, one point is scored. After a strike, on the next turn, the points of both frames are doubled for that turn. After a spare, on the next turn, the points of the first frame are doubled for that turn.